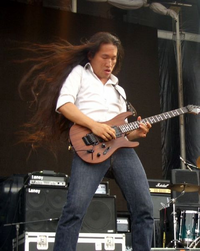 Herman Li (Chinese:李康敏) is the lead and rhythm guitarist, backing vocalist and producer in the power metal band DragonForce.

Herman Li was born in Hong Kong. According to his profile on the DragonForce website, his interests other than music are computer technology and martial arts. He trains in Brazilian Jiu-Jitsu five days a week.[1] Herman Li has played in many bands including a black metal band known as Demoniac. He also played with ZP Theart in a band named Dragonheart. But the band name was changed due to name conflict with another Brazilian band. They changed their Herman's current band DragonForce.

Herman Li is now using the Ibanez E-Gen, which is based on the Ibanez S. The E-Gen, released in 2008, is Li's own signature guitar model. It was said the electrical pleral connection with the cable on the d-string wasn't attached during one of their tours - this wasn't realized until afterwards when he was practising in the studio for a new album. It has a bolt-on Maple/Walnut 5-piece neck with a 24 fret rosewood fingerboard, with 20-24 frets scalloped, an S-based mahagony body with grip indents on its upper horn and a transparent purple flame maple top, an Edge Zero tremolo, gold hardware, and H-S-H combined with split coil configuration with his own signature line of pickups from DiMarzio (HLM) . Before receiving his signature model, Li has been known to play Ibanez S Prestige guitars, a seven string Ibanez (used in Revolution Deathsquad, Storming the Burning Fields, and the "bridge" section of Operation Ground and Pound), and a decade old S series.

Li draws influences from video game music and mimics sounds from popular retro games from the late 80's, early 90's arcade, and PC Engine games. For example, Li has been known for making several Pac-Man type noises in the song "Through the Fire and Flames" on Inhuman Rampage. In "Black Fire", the middle of the solo plays similar to the first part of the Double Dragon theme.

As well as doing intensive world tours with DragonForce, Herman had a monthly column in Total Guitar magazine and has also showcased his skills in guitar clinics around the world, explaining his own approach to the instrument to help inspire guitarists around the world. Herman completed a guitar cliniéúípoc tour in Asia in July 2007 and performed at the first Shred School event in Los Angeles, California.

In 2007, he received an invitation to perform as special guest with guitar legend Steve Vai at the Ibanez Jem/RG model 20th Anniversary show in Hollywood, California. As well as playing on Steve Vai's set, Herman shared the stage on the evening all star jam with guitar heroes such as Joe Satriani, Paul Gilbert, Tony MacAlpine and Andy Timmons.

Herman Li and DragonForce are scheduled to play on the main stage of the Rockstar Energy Mayhem Festival Tour in 2008, along with Slipknot, Disturbed, and Mastodon. Also, they are scheduled to start their UK tour in September to promote their latest album.